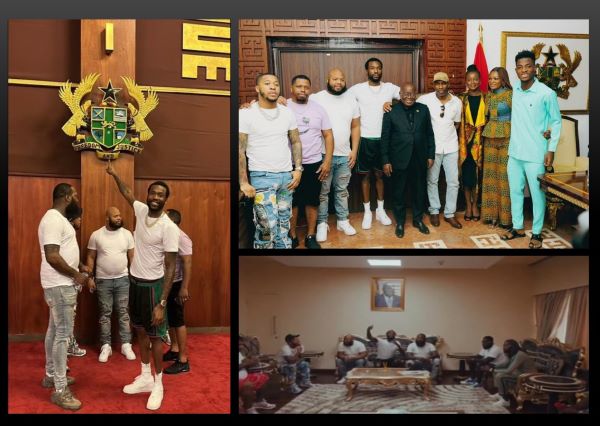 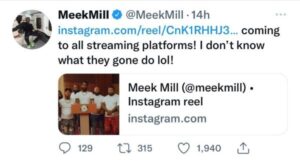 But to the surprise of many Ghanaians including politicians and bloggers, the American rapper released music video recorded at the Presidency (Jubilee House).

In the video circulation on social media,  Meek Mill is seen rapping in front of the President’s lectern surrounded by his folks.

The rapper was also seen in separate scenes capturing other areas in the Jubilee House including the conference hall and the forecourt. 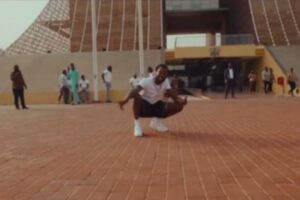 at the forecourt of the jubilee house

Ghanaians Fume Over The Music Video

Ghanaians have expressed their disappointment in what some describe as ‘disrespect of the highest office of the country’. 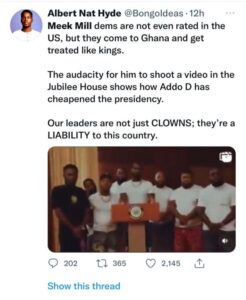 Hon. Samuel Okudzeto Ablakwa The Member of Parliament for the North Tongu Constituency, called for persons who allowed Meek Mill to shoot the video clip at the Jubilee House to be dismissed.

He described it as ‘desecration of the Jubilee House’

All those responsible for this despicable desecration of the Jubilee House by Meek Mill must be fired immediately. How do those explicit lyrics from the president’s lectern project Ghana positively? Is Ghana’s seat of government no longer a high security installation? 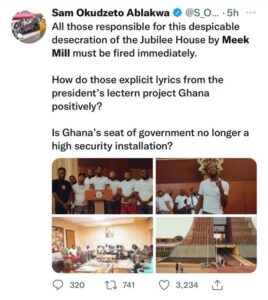 Other bloggers have also expressed shock at this trending story whilst some people also defend that even the White House, being the most protected place on Earth is sometimes seen in movies.

The occurrences of his visit

Meek Mill’s Visit has been enshrouded with dramatic events including a motorbike ride with slay queen in some parts of the capital, engaging in a brawl with someone and being pickpocketed of his mobile phone.

WATCH EXCERPT OF THE MUSIC VIDEO BELOW