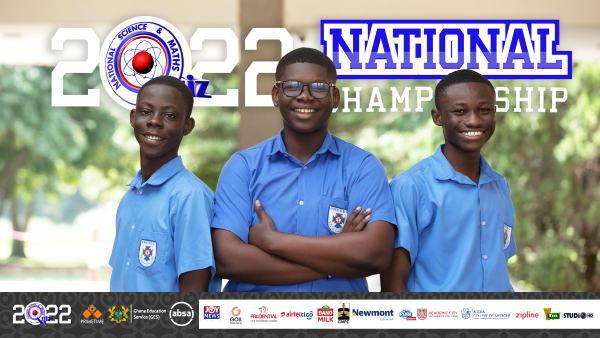 They clinched their 7th title on Wednesday night, in a heated yet thrilling final round of the contest. Legon Presec unexpectedly surpassed Kumasi giants, Prempeh College to win the 2022 National Science and Maths Quiz.

Prempeh College who were in a ‘comfortable lead in the earlier rounds were overtaken by Legon Presec in the final round (5th round).

The fifth round, which was the final round, ended with 50 points, 41 points and 32 points for Presbyterian Boys Senior High School, Prempeh College and Adisadel College respectively, apparently presenting Presec as Champions of the contest.

The National Science and Maths Quiz has been the talk of town and has been trending on social media especially on Twitter with education fanatics describing this year’s contest as a competitive one.

Having Presbyterian Boys Senior High School, Prempeh College and Adisadel College in the final can only best fit the description as the most heated final as these three schools are highly respected in the country.

7-time champions is of course a bragging right and Ghanaians say a big congratulations to Legon Presec for achieving this milestone.