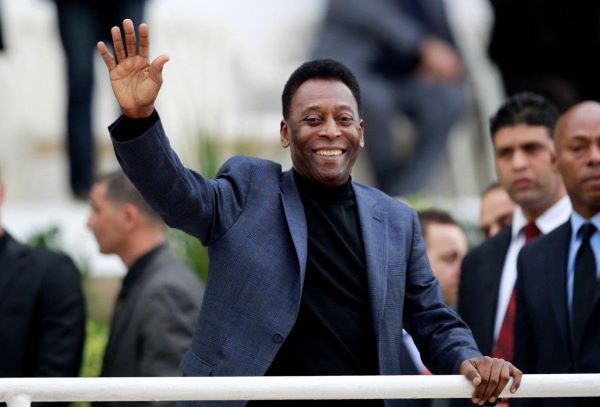 by Judeffah brazilian and world football legend pele passes away

Brazilian and World football legend  Edson Arantes do Nascimento popularly known as Pele has passed away at the age of 82.

The football legend’s demise was caused by cancer he had been battling with at the Sao Paulo’s Albert Einstein hospital, where Pele was undergoing treatment.

The hospital announced that Pele  died at 3:27 p.m. “due to multiple organ failures resulting from the progression of colon cancer associated with his previous medical condition.“ 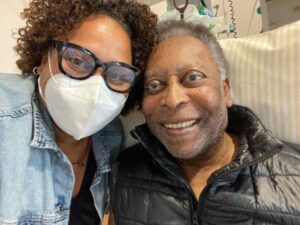 pele with daughter at the hospital where he was receiving treatment

The sad news was posted on his Instagram page with the caption below;

Inspiration and love marked the journey of King Pelé, who peacefully passed away today. On his journey, Edson enchanted the world with his genius in sport, stopped a war, carried out social works all over the world and spread what he most believed to be the cure for all our problems: love. His message today becomes a legacy for future generations. Love, love and love, forever.

Tributes and condolences have poured in  from football stars like Kylian Mbappe and Cristiano Ronaldo and from football fans all over the world  for the three-time World Cup winner and the Brazilian legend. 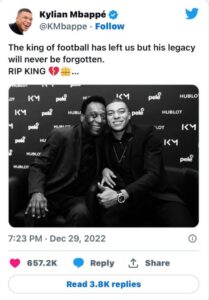 “The king of football has left us but his legacy will never be forgotten,” he wrote on Twitter. “RIP KING.”

Portugal star and former Manchester United player, Cristiano Ronaldo has also expressed his condolences to Brazilian’s and the legend’s family.

“My deep condolences to all of Brazil, and in particular to the family of Edson Arantes do Nascimento. A mere ‘goodbye” to the eternal King Pelé will never be enough to express the pain that the entire football world is currently embracing. An inspiration to so many millions, a reference yesterday, today and forever. The love you always showed me was reciprocated in every moment we shared even from distance. He will never be forgotten and his memory will live forever in each and every one of us football lovers. Rest in peace King Pele.” Ronaldo words.

World Pele joined Santos in 1956 and turned the small coastal club into one of the most famous names in football.

Pele won two Copa Libertadores, the South American equivalent of the Champions League, and two Intercontinental Cups, the annual tournament held between the best teams in Europe and South America.

Pele took home three World Cup winner’s medals, the first time as a 17-year-old in Sweden in 1958, the second in Chile four years later, despite the fact that he missed most of the tournament due to injury, and the third in Mexico in 1970, (that was considered to be one of the greatest sides ever to play the game).

He retired from Santos in 1974 but a year later made a surprise comeback by signing a lucrative deal to join the New York Cosmos in the then nascent North American Soccer League.

Santos club’s press officer has announced that a wake will be held at Santos’ Urbano Caldeira stadium, most commonly known as Vila Belmiro, on Monday.