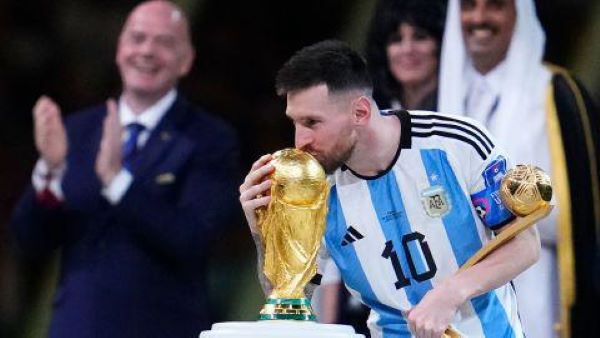 Argentina emerged winners of the FIFA World Cup Qatar 2022 trophy, laying credence to the claim that Lionel Messi is the GOAT (Greatest of All Time)

The final match regarded as one of the most competitive and nerve-wracking final the world has ever witnessed which ended in a penalty shootout.

Both Messi and Mbappe unleashed top-notch individual performances in the match for their respective countries but were not enough to see one side clinch victory in a 90-minute period.

Argentina’s one and only Lionel Messi, who had yearned for this day to come in his career embraced such glory in mastery performance leading his team to win the trophy.

Messi broke the all-time record for most games played at a Men’s FIFA World Cup.

Messi was presented with the Golden Ball award after the final, having been voted as the official Player of the Tournament.

He had also won the award at the 2014 World Cup. No other player has received the prize twice.

Messi was named as the official Player of the Match in five of Argentina’s seven games at Qatar 2022.

He has now won 11 World Cup Player of the Match awards during his career. The previous record was seven set by his close competitor, Cristiano Ronaldo.

4. Most Player Of The Match Awards At One World Cup – 5

The only games at Qatar 2022 to feature Messi and not result in him winning the Player of the Match were Argentina’s 2-1 loss to Saudi Arabia and their 2-0 victory over Poland.

Messi is only joint-fourth on all-time-World Cup list of leading scorers with 13 goals.

But he is now top of the pile in terms of goals + assists with 21.

6. Most Games As Captain

Messi captained Argentina in all seven of their games at Qatar 2022.

7. First Player To Register An Assist At Five World Cups

Cristiano Ronaldo became the first player in World Cup history to score at five different tournaments when he netted for Portugal at Qatar 2022.

8. First Player To Score In Every Round

Messi scored in the group stage, the round of 16, the quarter-finals, semi-finals and then final.

No player had ever scored in every round of a World Cup during its current format.

9. Most World Cups Played For Argentina

10. Most World Cup Goals For Argentina

Messi more than doubled his tally of World Cup goals during Qatar 2022 by scoring seven times.

That took his all-time World Cup goal count to 13, breaking the previous record of 10 set by Gabriel Batistuta.

Most football lovers have eventually come to a conclusion that Lionel Messi is the G.O.A.T (Greatest Of All Time)