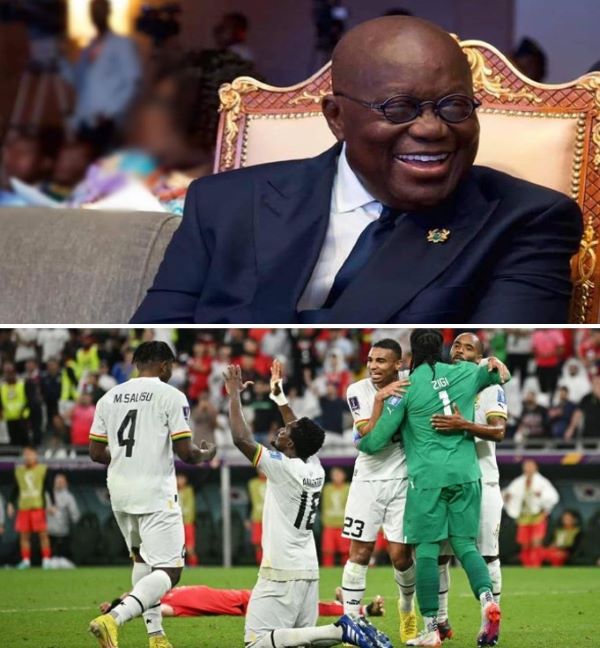 The President of Ghana, Nana Akuffo-Addo has commended the Ghana Black Stars team for their outstanding performance which resulted in a 3-2 win against South Korea.

In an Instagram post, the President of the land posted a picture of the players celebrating in from of the Ghanaian fans in the stadium and captioned it;

hard fought but thoroughly well-deserved victory against South Korea, Proud of the entire team and the unalloyed support given to them by all Ghanaians. Now to the final group stage game against Uruguay. 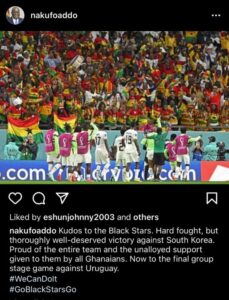 The South Korean side were regarded by many as one of the swiftest and formidable teams and Asian favourites with Tottenham Hotspurs’ star Son Heung-min.

Prior to the game, Ghanaian fans shared varied opinions as to the results of the match but of course most fans sided with the Black Stars to have a challenging contest but come out triumphant over the South Korean side.

The 5-goal thriller saw the Ghanaian side emerging victorious with the Ghanaian goalkeeper, Lawrence Ati-Zigi, Jordan Ayew and Mohammed Kudus being hailed for their prolific performances.

Kudus emerged the man of the match with two goals for his side and Ghanaians have taken to social media to express their love for Kudus who also plays as a midfielder for Eredivisie club Ajax. 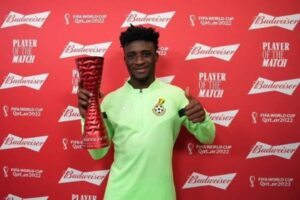 Ghana’s next match may be the most thrilling and heated contest against Uruguay on Friday, December 2, at 3;00 pm the match most Ghanaians fans see as an opportunity to avenge the Uruguayan side for the unfortunate incident in the 2010 FIFA World Cup in South Africa.