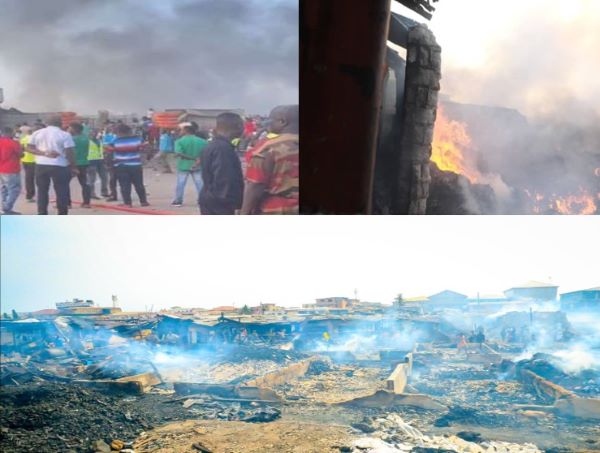 Several Shops in Katamanto market (Accra) have been ravaged by fire in an unfortunate incident that occurred on Tuesday morning.

Shop owners have had their shops and their valuables destroyed in the tragic incident.

The cause of the fire is yet to be ascertained as attention and efforts were channeled towards quenching the fire.

Fire fighters were seen on site trying to put out the fire to salvage the situation whereas policemen assisted in cordoning the area to aid the fire fighters in quenching the fire.

The National Disaster Management Organisation (NADMO) had their officials also on site to assist.

Over 150 shops and countless valuables have already been lost to the fire.

Onlookers were gathered close to the area while others stood by and watched as the fire fighters combat the inferno.

The Fire fighters’ efforts to put out the fire was ineffective due to shortage of water, a recurring situation that has always attracted criticism from the public.

Ghanaians have opined that the Ghana Fire Service preparedness towards fire outbreaks is poor and that the fire service keeps running out of water needed to extinguish the very flames/fire they are mandated to fight, this trend has not improved despite the number and value of properties that get destroyed in fire outbreaks. 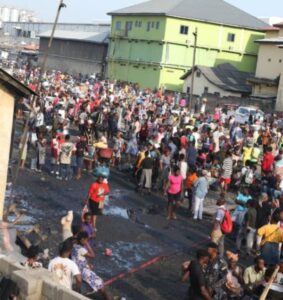 Some shop owners stood by and watched on helplessly as their only hope lied on the fire fighters to swiftly put out the ravaging fire. Sellers in the market and buyers alike woke up to this tragic event in such a challenging economic times.