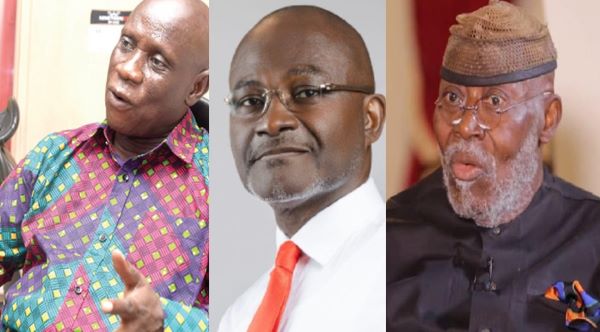 Former Deputy Director of Communications of NPP has jabbed Dr. Nyaho-Tamakloe’s skepticism about Kennedy Agyepong’s competence to lead the party.

Dr. Nyaho-Tamakloe believes the Honourable member of Parliament for the Assin-North constituency is not the right choice of presidential candidate for the New Patriotic Party. (This he explained in a Joy News interview)

According to him, Hon. Kennedy Agyapong, who has revealed his intention to run for presidential candidate of the New Patriotic Party has no track record of a devoted member of the party as compared to Vice President Dr Mahamudu Bawumia.

I said what! What is Nyaho Tamakloe trying to say?

In 2016 alone Kennedy Agypong and Kutin bought almost a hundred pickups. He paid a debt of $3 million for the NPP and that was even in the 90s,”

Tell me which of the 275 constituencies in Ghana have not felt the impact of Kennedy Agyapong? I am with Bawumia, I am campaigning for Bawumia but it doesn’t mean I should sit aloof if someone says something about Bawumia’s competitor and I have details about it,” he said.

Most party faithfuls have voiced out their support for their respective candidates and Ghanaians opine that the race will be a competitive one with no obvious winner.