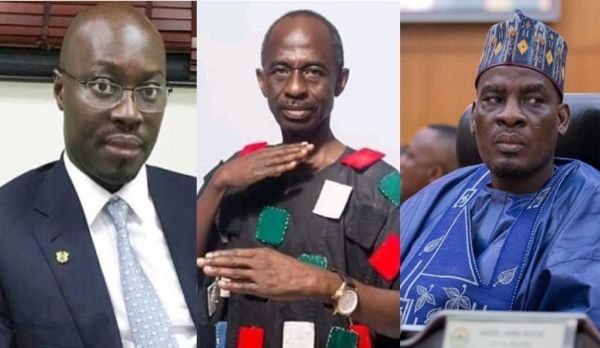 There has been a massive shake-up in the NDC leadership in Parliament with a letter signed by the General Secretary to the Speaker of Parliament effecting certain changes in its leadership. 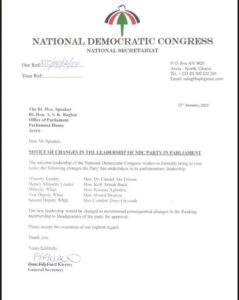 Also, Kwame Agbodza becomes the Chief Whip for the opposition side and will be deputised by Banda MP, Ahmed Ibrahim and Ada legislator, Comfort Doyo Ghansah as captured in the letter released by the National Democratic Congress’ General Secretary.

This move however is not premised on any categorical reason and it’s unclear what may have caused the changes proposed by the party.

Rumours are that former President of Ghana, John Mahama had urged the party executives behind this move to hold on to the decision whilst they deliberate on the matter but the former president’s advice was not heeded to by the executives.

“The new leadership would be charged to recommend consequential changes in the Ranking membership to Headquarters of the party for approval,” the letter read.

Reason Behind the Changes

Speaking on Joy News, the Chairman of the National Democratic Congress (NDC) Johnson Asiedu Nketia has explained the rationale behind the decision by the party.

Excerpts of his speech in the interview are highlighted below:

We started more than a year ago, we started at the branch level. We have since done elections in about 40, 000 branches and then from there we proceeded to the constituency level. We are done largely with all the constituencies; we have done regional elections and we just completed our national election and the next is to look at our leadership in Parliament. That is what we have just done,” he said.

We know for instance that going into election 2024, the economy is going to be the major battle ground and so many of the debates will focus on the economy. So you better put your best man in economy forward that is what we have done.

We also looked at energy. You know the petroleum and electricity challenges, so we needed to settle on Kofi Armah Buah, our former minister to be the Deputy Minority Leader

In terms of timing, it’s in line with the way we are prosecuting the national reorganization, in terms of why?, what it tells you is that the only constant thing is change. Since the environment is changing, leadership must change along with the new environment. he added

Some Ghanaians have remarked that this is apparently a witch-hunt and a tribal war emanating from the party’s new Chairman, Asiedu Nketia and may further trigger misunderstanding and division in the party.